Please upgrade your web browserYou’re using a browser that we don’t support. To get the best experience using our site, we recommend you upgrade to a newer browser – please see our #placeholder#.supported browsers list
Cathay business

There are currently no important alerts. Click "View all" to read our travel advisories.

Last month, Cathay Pacific received its first Airbus A350-1000 – a bigger and better version of its smaller sister aircraft, the A350-900.

The high-spec A350, a quiet and fuel-efficient aircraft, has been part of Cathay Pacific’s fleet since 2016, and has since been rolled out across the airline’s route network.

As you’d expect from two members of the same family, the two aircraft share many characteristics, including looks, with their distinctive ‘raccoon’ eyes. In fact, up to 90 per cent of all the part numbers in the -900 are replicated in the -1000.

That said, the difference between the two is more than a simple seven-metre stretch. Some of the parts that aren’t shared are very significant. These include new Rolls-Royce engines that offer more thrust to deal with a 28-tonne heavier maximum take-off weight. These XWB-97 engines turn faster and run hotter than any others in service. To reduce the stress on airport paving, the rear undercarriage now has extra wheels – like the Boeing 777 – to spread the extra weight.

Inside, some differences will be noticeable to passengers. The additional fuselage length is at the front of the aircraft, which means that the Business Class cabin is integrated between the two forward sets of doors rather than split by them. In the Economy Class cabins there are new seats from a new supplier. 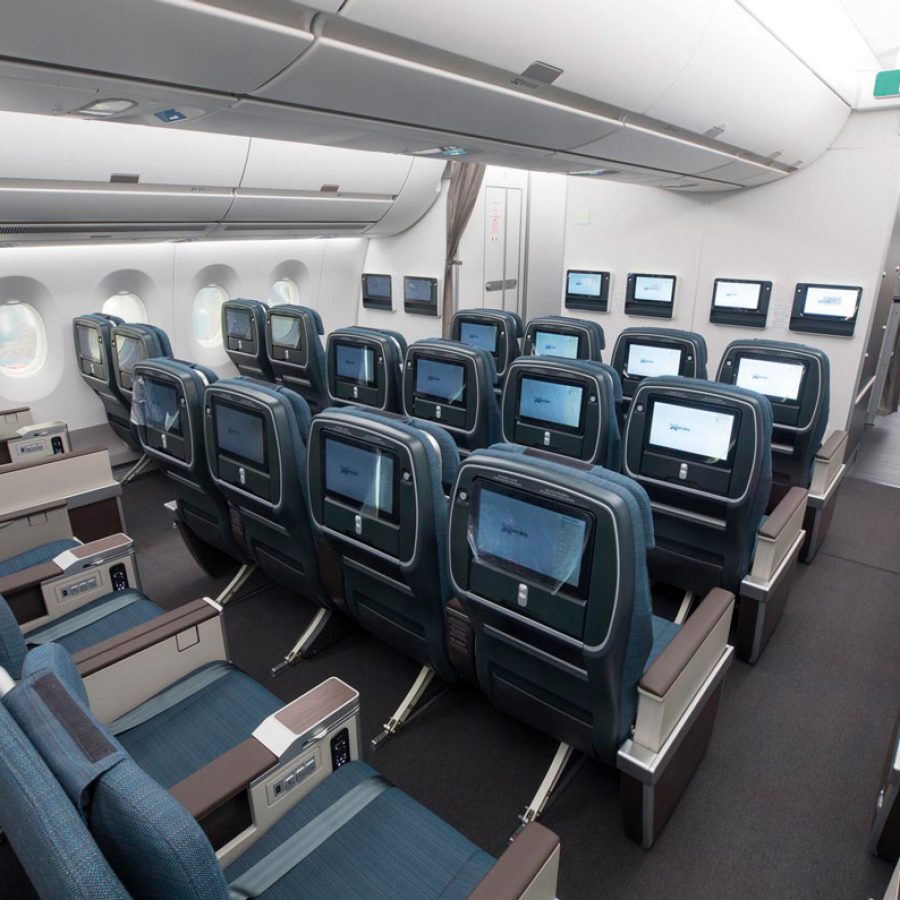 The Airbus A350-1000, too, comes with three cabin classes, so routes that require a First Class cabin will continue to be served by four-class 777s, until these are replaced by the new Boeing 777-9 from the mid-2020s.

It will add capacity to some of the ‘longer and thinner’ routes that the -900 has pioneered, such as the new European destinations.

‘The Airbus A350-1000 is there to give better operating economics on those routes where we’re currently operating Boeing 777s,’ says Paul Barwell, head of fleet and passenger scheduling at Cathay Pacific. ‘Over time, it will start replacing 777s on some long-haul routes.’

The -1000 is a different aircraft ‘type’, and although it shares many of the characteristics of its smaller sister aircraft, the planning, ordering, specifying, inspecting and certification processes were just as detailed as they were for the -900. Cathay Pacific will be the first airline to operate the -1000 into and out of Hong Kong.

Prior to the aircraft delivery in Hong Kong, Cathay Pacific flight test pilots performed a test of handling and systems at the Airbus headquarters in Toulouse, France. The aircraft was then held at the delivery centre for around 10 days, to attend to work that needed to be carried out as a result of a painstaking inspection.

Only then was the aircraft released for the flight home to Hong Kong – but there will be no respite for the onsite team. The inaugural Airbus A350-1000 is one of a continuous stream this year, with one or two new aircraft joining the fleet each month.

Related stories
A pilot’s 10 favourite features of the Airbus A350
A plane of many parts: tracing the global supply chain of an A350
What it takes to prepare an A350-900 for its delivery flight